GPEKS is deploying ultra Light Rail Train -  Elevated High Speed  projects in Gatineau, (Canada) and worldwide. The name of the Train project for Gatineau is G-Train (Train-G in French). This urban rail system will initially connect the western portion of the Gatineau city (Aylmer) to the downtown area (Hull) and then to Canada's Capital, Ottawa. Thanks to the savings possible with that technology versus traditional light rail (tramway), for the same cost as the Aylmer-Ottawa tramway, we will expand the Train-G network to the rest of Gatineau and up north (urban rail). We are also working to expand the Gatineau/Ottawa urban rail system with intercity (500 km/hr high speed) lines to connect Gatineau to Montreal (30 min ride) and Gatineau to Toronto (55 min ride). The lines will then connect Toronto to Detroit and Montreal to New-York via Boston.

Benefits of G-Train project to residents and public administration

Working with its network of private and public investors, GPEKS is able to provide 100% of the funding required for the inital phases I and II of this project.

This train technology is based on the experience and achievements of the entire humanity in the sphere of road construction and vehicle creation. Adopting the best of what was created before us, learning from the mistakes of others, SkyWay has created what we believe is the safest, most cost-efficient and reliable transport of all systems that have ever existed.
This video illustrates what a SkyWay Urban train looks like and explains some of the benefits. GPEKS is working on a localized 3D enhanced virtual reality video (2019 draft version 0.9 here - next bilingual version to be released October 2019) that will better illustrate the GPEKS project in the context of the proposed route in Gatineau/Ottawa.

The final location of the line and stations will be determined as result of extensive consultations with the population, municipalities and various stakeholders (UQO, STO, financiers, etc.). A pre-feasibility study has been initiated and will be followed in 2019 by a more detailed feasibility. Our plan is to work in partnership with academia teams such as Willis College (various disciplines), Ottawa University MBA (business planning), CEGEP (3D Modelling, Graphic design), UQO (Feasibility) and Carleton University (Engineering). The detailed feasibility will feature the construction of a short line segment for the purpose of certification with Transport Canada.

GPEKS will make sure the final line tracing and stations will be situated in logistically strategic locations and places, with easy communication with the other transportation networks, from the STO, and those of OC Transpo and O-Train (Ottawa). The third station of phase I will be close to the campus of the University of Quebec - UQO (behind)

There are many strategic and economic reasons for the proposed tracing (simplification, cost, view of the river, less interference with local traffic ...).

Our plan is to visually integrate the elevated rail line with two sections of vegetation wall (such as cedars) on each side of the lines (when the line does not skirt the park) to hide the lower part. The train will be decorated with wildlife photos of local Canadian forest, trees and animals. Some of the train's panels (or windows) will be covered with electronic signs that can be used to pass promotional videos about the region for example. We plan to cover the walls and roof of the train with BIPV thin-film Solar energy (CIGS) from Hanergy, as well as newest generation of batteries such as printed batteries using nanotechnologies and graphene. The final major technological feature is the possible use of Hydrogen to power inter-city trains without having to connect to the electrical grid.

Residents who live close to the line will have the privilege of being offered shares in the project, with an estimated yield of 15% per year.

Deployment across Québec, Ontario and International

Comparison of features of the three main types of SkyWay trains

Comparaisons of SkyWay vs other trains

Cost Comparison with other types of transport 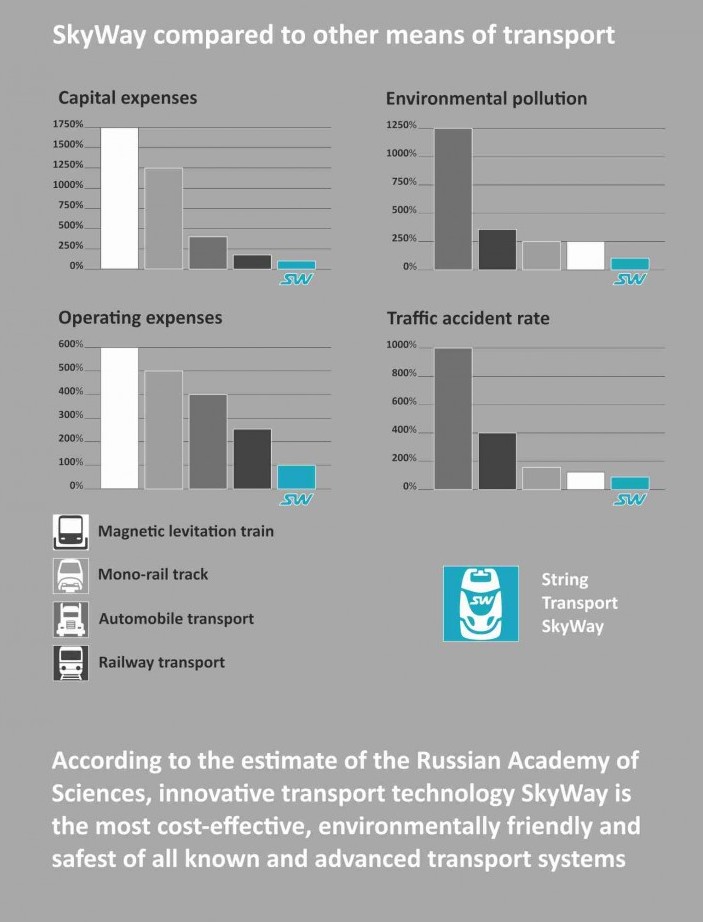 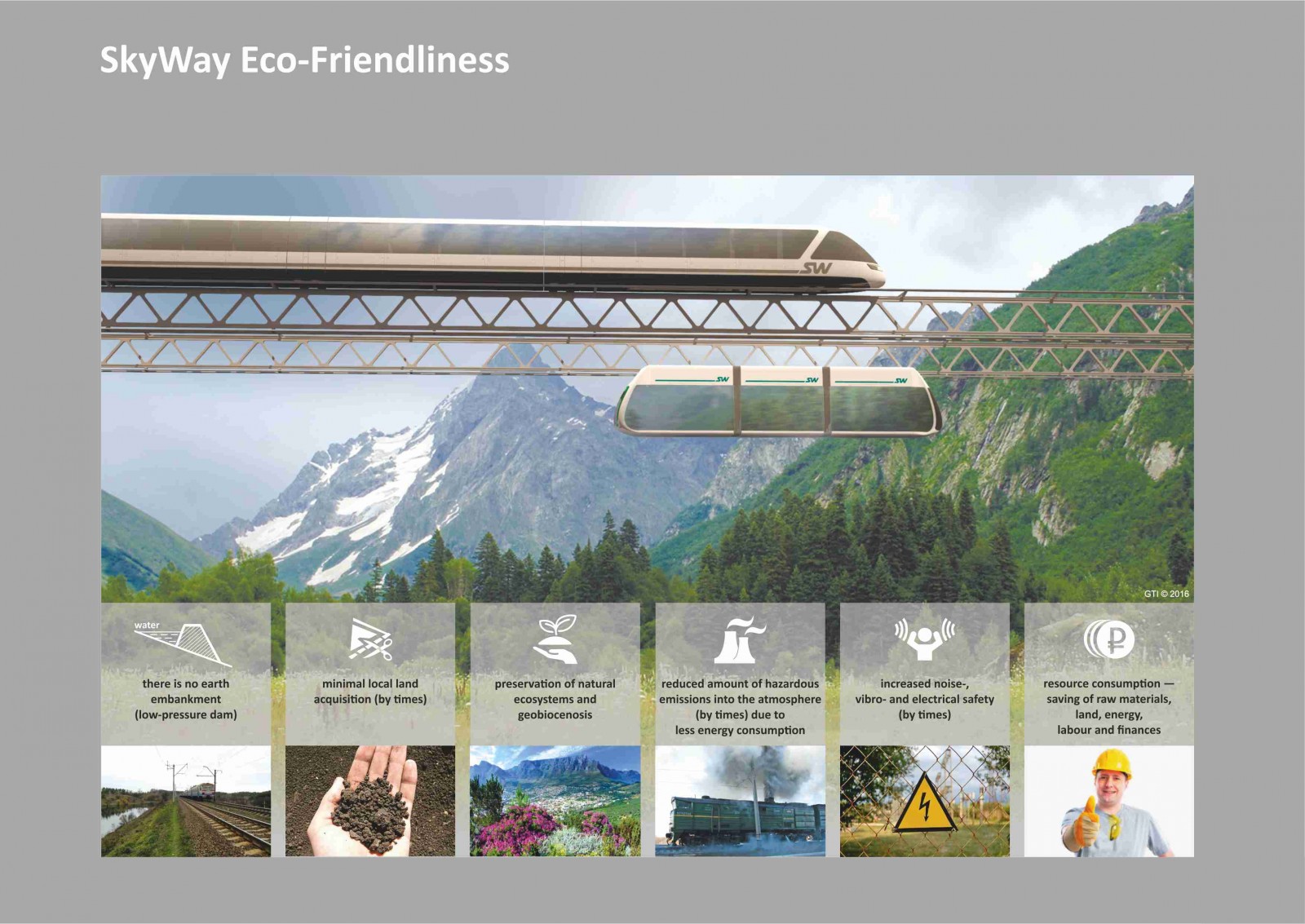 Comparison with magnetic LTR and Tramways 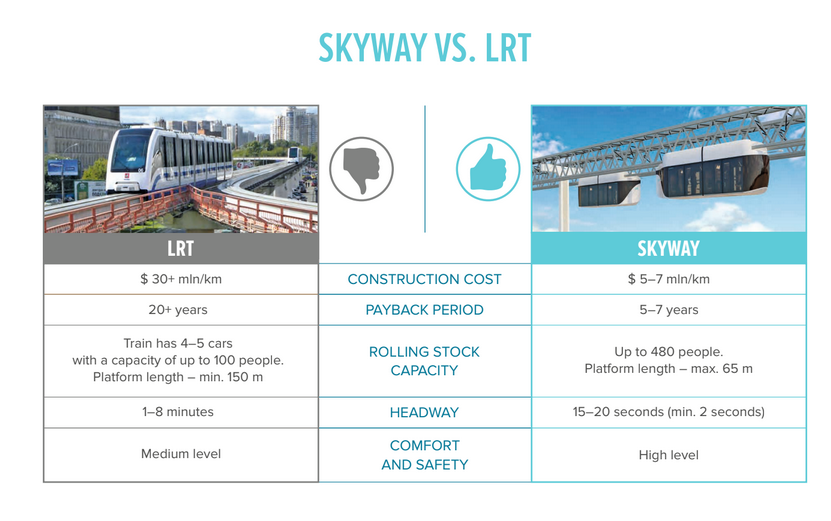